Corella are a band H2N have become very fond of in recent times seeing the band support The Glass Caves in York twice in 2017. They have an energy and buzz that is rare in indie bands who often seem like success should be handed to them on a plate. Corella though are as hardworking a band that are out their and their new single Barcelona Girl is testament to the hard work the band have put in so far this year.

As the title would suggest, the song is a real taste of summer. You can see yourself sat on a sunny beach in Spain with your best mates, a few bottles of San Miguel and a huge set of speakers pumping out Corella’s new single on repeat. The track kicks in with the powerful, almost silky vocal of Joel Smith. The happy riff that continues throughout the song is so infectious it hurts and the chorus is as catchy as I’ve heard this year. There’s talent oozing throughout the track from the aforementioned vocal, to the drum taps and the backing track which conveniently actually sounds like the call of a corella. The middle eight is one of beauty and I can’t wait to hear the track live now I know it well. The track erupts into an indie explosion of sounds; during festival season expect bouncing, hugging, dancing and a hell of a lot of singing. Barcelona Girl is an indie masterpiece.

At their last show in York we spoke to the guys about how the year had gone and what the future holds for Corella. 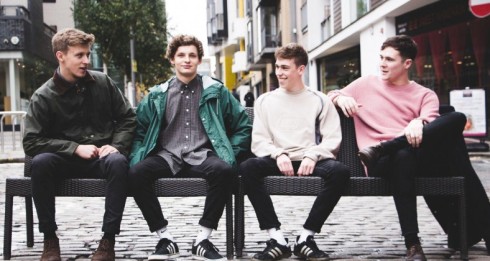 Corella – why the choice of name?

We picked it because were all from different places so..

Is that the story you’re really going with haha

Jack sort of picked it

We just sort of liked the Spanish sound of it, the “ella”.

How did you meet

It’s all first year in Manchester, we were all studying music so it all worked.

If you could describe the sound in a sentence what would you say?

A mixture of unique stuff from ourselves and grabbing other things

Drummer: I think its currentpop music but we give it contemporary indie edge

I think its refreshing, I like to think when people listen to it their not just another indie band

What makes you unique then in the market?

We just bring in what we want to the band really

We all have similar influences but each individual influences really help the sound. We chuck it all together

It all happens quite naturally really as well

We just get in a practice room, write record and it comes out naturally

And Fever came out earlier in the year how has that been?

The video was amazing, that brought in loads of different people, as well as the song we’ve found it has engaged loads of people. We have a big one coming soon “Barcelona Girl” coming out..

The last few weeks seem to have been pretty cool as well..

We had a sell out in Sheffield which was great, our first headline in Manchester, we have Leeds booked.

We seem to be slowly snowballing picking up a few people

Who are you close with on the scene everyone seems to be great friends at the moment?

Cassia – shout out to Cassia

We’d love to play with Marsicans, but if you’re in that community playing with decent bands it’s all good really, there’s no competition you’re all just helping each other get to the next level

Huge festival season coming up, what are you excited for?

We got most of them through Scruff but we’ve got a few things we have to keep under wraps.

It’s mad to be on some of the bills though, like Truck is just amazing, it’s gonna be great. A lot of them we wouldn’t go to already as a band either so that’s nice too.

Bring out new single, smash the gigs have an amazing festival season really.

Some time down the line it’d be good to put out an EP of brand new music.

We have loads of songs so we need to churn them out, get in the studio

This time next year where would you like to be?

Hopefully have the same feeling but bigger stages. It’d be good if we were headlining 500 capacities

If you could change one thing in the music industry what would it be and why?

I wish, there were more people selling tickets, more promotion opportunities too for people

I’d say like, it’d be better if more people wanted to go to a gig and go to live music more. There are so many people who aren’t bothered about going to a gig. I wish music in a way wasn’t so accessible, like they have to buy it or go and see it to hear it