One of the best small venues of all time was no doubt The Cockpit in Leeds which tragically closed last year. The only band I ever had the pleasure of seeing there were Natives on their Indoor War run of dates some years ago. With a change in sound that has seen the band embark on support tours with the likes of Busted, we caught up with Jack from the band at the Key Club in Leeds once again a few weeks ago.

So, three nights in four nights in, how’s the tour been?

Good, yeah were getting into the swing of it. We were a bit unprepared, circumstances out of our control meant the first nights took a while to get in to but yeah we’re on it now

Since we last saw you, you’re sound has changed hugely, what’s inspired this?

Erm well I think it probably seems drastic on the face of things. The jump from the album to the recent stuff will be a big jump for the fans but for us it wasn’t that big as we wrote the album a long time before putting it out. There was no intention to make something different, the only difference was that we wrote stuff we enjoyed and it just came out like this. It wasn’t us saying we want to sound like this we just got in a room and did that.

We don’t hate that album, and were playing some songs from that tonight and that’s the first time we’ve played from that in a long time. Were not shunning that but we need to make sure we play music we enjoy too. When we wrote Indoor War we were a five piece so now a four piece so it was working that out too and what sound we wanted to take on.

Has anything changed much within the band itself?

The only thing that’s changed is our attitude toward it all. Whenever we do anything whether that’s design art, make a song; it’s all about us. There’s so many factors, press, radio etc and we just found that we didn’t want to think about those things and it shouldn’t be about that and we think we make the best art when we do that. Our next album might be completely different who knows. But it feels like a weight off your shoulders when you work like that.

So is there music on the horizon? (Excuse the bad pun)

The intention was to go with a big album. We’ve written a 20 song album with accompanying novel which has been four years in the making. I think we’re just gonna keep putting songs out. 20 is a lot to digest in one go. We have a load of music and nobody’s heard it so our intention is to get as much music out as we can.

With the tour you’re currently on, what can fans expect?

Main difference if you’ve seen us on this album cycle is were playing old songs as well and also our lack of fitness is apparent. We’ve sort of been doing support tours since we came back and were not prepared. Were very drilled in being a support band, showing off what we’re about whereas this is a bit more casual and were aware of the size of the shows so we worry about having fun more than anything. I feel like, I don’t even know what we sound like to watch and that’s cool really.

How was it touring with Busted?

Amazing they were some of the nicest people we’ve ever toured with they treated us so well. People would pay thousands of pounds for that opportunity so for them to turn round and give that to us was amazing. We come from an alt background and there’s always that question of where do we sit now. Its nice to go support a pop band because we’re certainly poppy right now and to be put in front of that many people was amazing. Cant say enough good things about the guys.

If we were having this conversation in one years time, what would you like to have happened?

Next year we’ll two things I’d like there to be lots more music out. I want all 20 songs to be out in the world and erm other than that our targets are a bit odd. If we spend a year pleasing ourselves first making great music I’m happy with that. Obviously massive yours is great but for us as a band those things are the target we get lost a bit. We make the best stuff when we go do something for ourselves. We’d probably be working on album three, I love playing live but for me it’s about writing and producing so I would hope maybe in a year we can start working on that album and who knows what we will sound like. There is an r and b slow jam on the album were quite tribal at the moment so yeah no idea where were going next.

How is that writing process for Natives? Is there a set way of doing things?

Yeah, it’s a bit different so this album we had a story first so we had this narrative. Then Andy plays drums, we come forward with track ideas and said this sounds like this part of the story. Everything gets built up in the studio. The fist time we play the songs is live so we build up as if it’s a soundtrack to a film then we don’t have to worry about playing it live. But the other thing we have is we realised, I normally play guitar that sounds a certain way, but if Andy picks up a guitar he will come at things a different way or if I come at vocals it’s different and we’ve found that works really well. It makes it more interesting writing each others bits of songs. Makes you write with your ears not the muscle memory a lot.  We use laptop a lot which is then writing with my ears which is a great way. 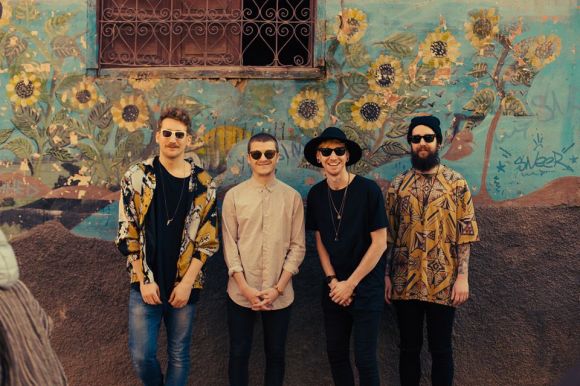 What would be top of your music bucket list?

Er, win an Ivor Novello, because that is about song writing and we want to be great writers. Also our new album is written in mind that it could be a musical. It’s quite like a rock opera so to put that on the stage with us in the pit that’d be amazing. It’s very much written that way, some of the lyrics sound off out of context so like Swahili or Lions but when you have it all together it fits.

If you could change one thing about the music industry what would that be?

Erm, I just feel like being a musician in the UK isn’t treated as a profession.i think people think going on tour is just going on holiday with your mates. And it’s not about money but if you look at how much you put into something compared to get out it’s crazy. If I want to go be an accountant I can go get a loan train and be one, but if I wanna be a musician or be creative and I have explored these things it’s very hard to get support and guidance. I think the musicians and creatives are not as valued as other professions so I’d probably change that preconceptions. I mean we’re pretty full time but it’s hard. We work on Natives full time but we have to do other things so I will tour manager, bit of guitar teaching but we have a habit of being incredibly ambitious.

We’re here at the legendary Key Club, have you headlined before?

No we played here with Farro, and I have no idea what to expect. Traditionally we’ve never had that show in Leeds, it’s never really happened for us. This tour was all about playing places we haven’t headlined. It’s fun for us to play and if people come they come were not expecting anything tonight haha

To finish up, give us one highlight and lowlight of Natives so far

We went to the ohillipines and played out there. That was just something that didn’t seem like it should happen to a band like us. We played a shot with Chilli’s and a headline show at a shopping center and both were ridiculous.
The low is erm, just I think expectations from the first album and not earning to..actually no I’m not gonna be negative I guess the low is we have so many ideas and we just can’t do everything. Our TM says were like an iceberg like there’s so much going on underneath what people see. Were quite a hard band to be a fan of and I hate to say this but we disappear for ages then come back then disappear, it must be quite hard to follow us and that’s the low I suppose. People are so supportive and j really want to make sure it’s consistent enough for our fans.