I have to start with an admission – before The Elephant Trees played their single launching set at The Wardrobe, I was very worried for them. In Your Prime, Ormstons and Conflare had been so, so good opening for them, having never seen the band before I was unsure if they’d be able to follow the preceding acts.Now I hate admitting when I’m wrong, but it is extremely safe to say, I was as wrong as I ever have been with that assumption as the set that followed was nothing short of perfect.

The list of superlatives that would be needed to describe the shows The Elephant Trees put on is endless. Raw vocals, infectious lyrics and intricate, tight music all combined so well and it was clear the band were having the time of their life on the Wardrobe stage. With Martha’s singer-songwriter background coming through on so many tracks, The Elephant Trees have an edge to them that many bands skirting around the current scene at this level, don’t have. This isn’t to say these guys can’t let loose though – debut single 90 Degrees was by far the set highlight musically, a track at the heavier end of their sound. The crowd knew the words despite the track only being released that week, the performance was note perfect and the single, all round was and is the bands best song.

The moment of the night though came at the end – as Martha came out with just the acoustic to sing the first song the band ever wrote and played, the glimmer of a smile that turned into a beam as the entire crowd sang back to her was a moment I’ll struggle to forget. When the band came back out they looked energised, looked relaxed, looked like they were a band that perhaps knew this was the turning point, the moment they’ll look back on when headlining huge stages in years to come as the defining set in their early career. It was a simply flawless set and I had the genuine pleasure of speaking to the band before they headed onto stage.

In Conversation With….The Elephant Trees (Martha, Will, Sam and Tom)

So guys, you excited to be here headlining The Wardrobe?

Sam: First time headlining yeah can’t wait. It’s got a really good sound and they’ve just updated in November so should be great.

Martha: Yeah [we chose it because] it’s a really friendly venue.

Sam: It’s a great feeling venue as well because there’s so much history to it.

How did you become The Elephant Trees then?

Martha: It was my school project really and I basically had to do a lead project and so decided to make a band and these were the most talented musicians I could find in school so..yeah..

Sam: We’d all been in many many bands before though, all your classic kind of cover kinds of bands.

And obviously the sound of The Elephant Trees is likely very different to those, how would you describe your sound in one sentence?

Sam: Can I start? We have one that someone once said to us and I just think it’s brilliant. “If Biffy Clyro were Ed Sheerans backing band.” [Nods of agreement at just how suitable that sentence is].

Will: I’m gonna go Alt-rock fusion, nobody knows what that means but it sounds cool.

Tom: There’s also the Paramore in there too, some of the heavier stuff

Sam: Plus we have a ginger singer, and we’ve covered them before too

Martha: Someone said we’re Laura Marling on speed which I like.

What music would you say influences you most?

Martha: There’s a band we played with a lot when we first started out, they were like our mentors called City of Lights they were really big influences getting us to where we are now.

Sam: There’s loads of influences that we’re all into that you can’t really hear as much, so like 21 Pilots, and we like heavier stuff too, Muse is a big one, Royal Blood and that.

Sam: Far better than we could have imagined, people have been loving it. Without been cocky, it’s been amazing, the streams are high so its big for us.

Will: It’s already got 1K streams on Spotify

Martha: This is our first single on Spotify and stuff so it is a bit different for us.

Sam: it’s the first exposure a lot of people have had from us. We recorded this one in December and we are, exclusively, already sat on the next single. We recorded with the fantastic Mike Heaton of Embrace he’s been great. We started out basically the three of us me Will and Martha laid down a guide track. Then Tom did his drum tracks, we then went through bass, couple of guitar tracks acoustic and vocals after. Sat in there another hour or so mixing. All the interesting things come in at the end doing vocals when the new stuff gets added to the track

Will: And it’s all live drum sound which is incredible really. I wasn’t there long really either, I was in there about ten minutes really, one take in and out haha.

Why did you choose that particular track for the first single?

Sam: We’d had a lot of good comments about it live and it was one where we thought like it’s a noticeable riff so when someone hears it live then goes to listen to us they go I remember hearing that.

Will: I think overall it’s our best song. I was an advocate for how recognisable it is.

Tom: It’s probably the most “our sound” we have

Sam: Yeah it’s the heavier end of our sound but it’s quite a live feeling track compared to other ones.

Sam: Yeah we’re playing a lot of local festivals, Sucker Punch festival, we’re going up to Northallerton for Fleecetonbury, we’re headlining [insert date they are definitely not playing]. Scrap that, scrap that.

Martha: We’re going over to Manchester quite a lot aren’t we.

Sam: Yeah we’re playing Night and Day, Gullivers, some of the smaller Manchester venues. We’re all moving over there in September for uni so we’re trying to establish a base there and a set of dates there as our second city.

How has it been trying to get dates in Manchester?

Sam: I think it’s been sort of easier to get gigs to start with compared to Leeds but that’s probably because we’ve already built a reputation around getting ourselves known and Martha has a load of contacts already so we’ve sort of found it easier but it’ll take a while to build up the fan base. We have friends there but we definitely don’t have like 100 mates that pile down to The Wardrobe on a Thursday night kinda thing.

How has it been growing up in the Leeds music scene?

Sam: It’s got a good amount of venues and promoters that’ll take bands out size so you’ve got like Double Denim, Futuresound.

Sam: It’s been a really good city to start out in.

Will: I just wish though there was that one really big Leeds band. I mean like in Manchester, or Sheffield with Arctic Monkeys level. Like Kaiser Chiefs, their first two albums, but didn’t get there. Ricky just got tight with like Jessie J and that and wasn’t the same.

If you could tour with anyone who would it be?

Martha: Everyone always hates me for this but they play stadiums night after night and I’m going for Coldplay, because I love them and have no shame in admitting that.

Sam: To be honest they do seem like nice people. I’d say Biffy hands down. If I had to pick a smaller band though I’d go Arcane Roots

Tom: What about Foo Fighters, I just think that’d be so much fun. They played that small venue in Somerset just so cool.

Will: You’d just end up asking them everything about Nirvana wouldn’t you.

And where would that dream tour be – what’s the dream venue?

Sam: Probably one of the smaller more historic places like Cavern Club.

Martha: Erm, I wanna play the Cockpit it was always my dream [:(]

Will: I saw one band there, it was amazing.

Tom: I really like Ritz but you’ve already played it.

Right – away from music, and just because I asked Ormstons this and it was amazing, if you could be in any movie, which would it be and what character?

Martha: I would like to be Zac Efron in HSM because he’s just got the best life ever, he’s great at everything, everyone fancies him..Troy Bolton.

Will: Sean Connery James Bond because there’s that photo of him in the alps, lent on an Aston Martin DB% and that is just the coolest anyone has ever looked.

Tom: I’d just wanna be in a Die Hard film but I don’t know who, just anyone just to say “I’m in Die Hard”

Will: Just be like one of the Joker’s goons, I mean you get killed in like the first five minutes..

For the first time ever, me asking who would you never want to tour with wasn’t a slagging match and instead delivered some really considered responses. I choose deliberately not to publish the answers to that question as I love all musicians and artists but it throws up some great debate and it’s testament to this band they didn’t just use it as an excuse to release pent up anger at other bands.

To finish then, if there was one thing about the music industry you could change what would it be and why?

Will: I hate brown nosing, it’s the worst thing in the world. We’re slating it but we will have to do it anyway, you can’t change it from the bottom of the pile you have to be at the bottom to change it.

Sam: Probably more the fact you don’t have to do it, because you do. The necessity of money. We’re still gonna have to put money onto the single.

Tom: It’s just the cost of everything, recording, video, merch and everything. The Facebook sponsors and that

And is that difficult for a band like you?

Will: To be honest if you’ve got the start that we have, you don’t have the money and you then still have a bit of money it’s more rewarding and you feel better. It’s like cheating on a video game, when you do it legit it’s like, ah yeah sick, but cheating you’re like, yeah…but did cheat.

Sam: I think if there wasn’t such a discrepancy where you can see whose been able to put loads of money in at the start. We were very sort of, DIY when we started, even down to the fact that his drum skin has electrical tape on as the logo because we didn’t want to pay for a drum skin.

Martha: Sam is really good at making connections, he’s a nice guy and that has made us loads of connections and mates rates. I just wanna throw in sexism as an issue in the industry.

Will: We have discussed that one before; I think it’s because women get typecasted in a way like, you need to be an Adele for example.

Sam: Coming back to the single release, we’ve got three out of the four bands on tonight female fronted.

Martha: We’re playing in Manchester at a gig that’s all female fronted bands which will be cool.

Tom: It’s like when you see the Leeds Fest lineup and they get rid of the ones that aren’t women and there’s like three left.

The band stuck around to talk to me about all things music, bands and who we love and maybe don’t love as much. They were a delight to chat to and hope this was the start of a killer relationship between H2N and The Elephant Trees. 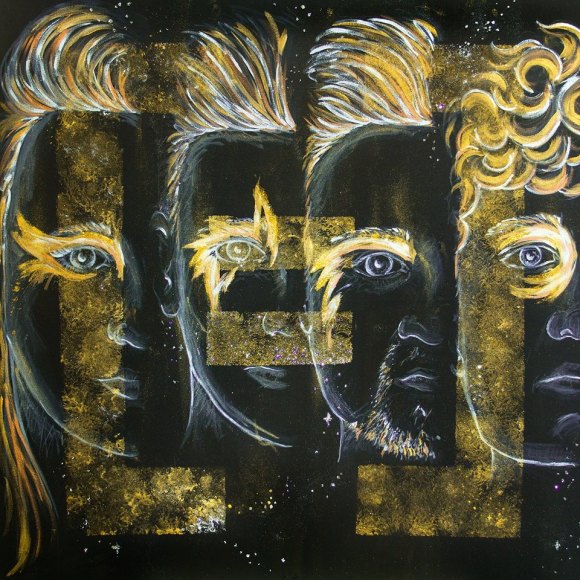