Friday 13th January saw the release of VITO’s debut single Masquerade. The four-piece from Newcastle are one of 2017’s hottest prospects after signing with End of the Trail Records near the end of last year and if this first offering is anything to go by they are going to be household names very quickly. The track’s video has been online for just two months but has already amassed over 5,000 views so the reception to this release is expected to be huge.

In an industry where everything that seems to be released nowadays sounds the same, VITO have managed to follow the perfect indie formula whilst sounding fresh, sounding novel and more importantly sounding insanely good. Tom Conway (vocals) drives the track with an energetic yet controlled vocal whilst Andy Bell (guitar) and Jasper Watson (bass) keep the song alive with their varied riffs and perfect harmonies. The most underrated performance thus far when reading other reviews is that of drummer Dom Willis; from the on point rhythm during chorus and verse, to the crescendos creating the exceptional bridge section before the final section, the drum work on this track is nothing but outstanding.

I don’t want to compare these guys to anybody as I feel they actually hold a unique place in today’s market but they will certainly suit fans of Catfish and the Bottlemen and have been compared on occasion to The Gaslight Anthem. For me, VITO and Masquerade are individual, their balance of upbeat yet focused, gritty yet professional, is hard to come by in the music industry today. This song will mean a lot to the band and I had chance to quickly catch up with guitarist Andy before the release this week. 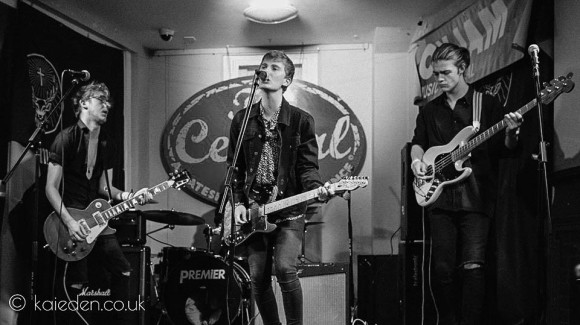 How excited are you to be releasing your first single as a band?

We’re really excited! We were going to release it ages ago but since we got picked up by Kelly at End of The Trail Records we’ve been making bigger plans than we originally had. It’s been really fun so far so we can’t wait to see how it pans out.

What is the single about and how did you go about writing it?

It’s about getting out of the city you were born in and going on to do bigger and better things. That’s generally what most of our music is about to be honest; being young and wanting to be successful and all that. We wrote this at in 2015 I think, but it’s gone through loads of different versions since then. Tom usually comes to us with the basic skeleton for the song and we flesh it out in rehearsals. We recorded it at home and mastered it with Pete Maher (U2, Rolling Stones, Noel Gallagher etc).

Are there any artists that have directly inspired you in the making of this track?

We really love Tribes, The Strokes, Gaslight Anthem etc so we’re always going to be influenced by them. Had a lot of comparisons to Catfish and The Bottlemen which is never a bad thing I guess.

Already with 5,000 views on Youtube you must be looking for a big response to the song?

Honestly the response to the song has blown us away, we never expected to have any listens at all! It ended up being the most viewed piece on littleindieblogs which we premiered the video on, and with only being up for a couple of months we were chuffed with how it had gone down. The tune got us some class gigs too, we recently played at the Stadium of Light before a Sunderland game purely because the promoter listened to us on soundcloud so we’re hoping it’ll continue.

And have you got any upcoming gigs to promote the track or is that all under wraps for now?

We’re at the O2 Academy in Newcastle on 27th February and then opening a new club night at Think Tank Underground (formerly Head of Steam) on 2nd February. Those two gigs should be wild, we’ve been looking forward to them for ages now. We’re also playing a new festival at Northumbria Uni called Canny Fringe festival in March and heading back down to Camden in April – we’re always pushing the gigs on social media so just type in @wearevitouk and you’ll always be able to find something.

Check out the video for Masquerade here and look out for a feature on the band in the coming weeks!